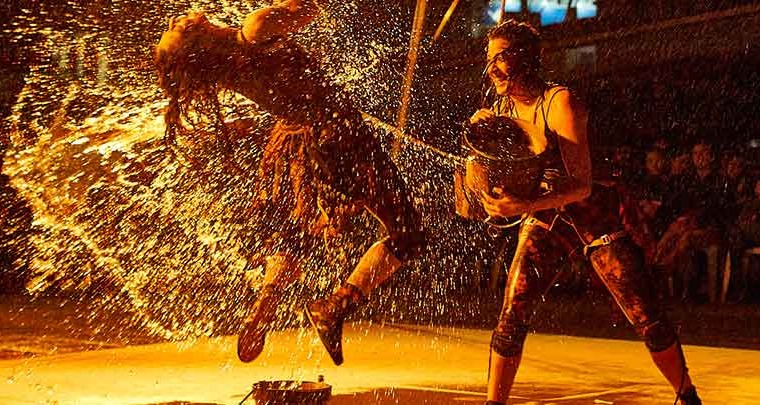 Visual poetry about solidarity, the environment and friendship.
A reflection at 10 meters high, with stilts, aerial dance and acrobatics. A metaphor of our passage through the planet.
In a dystopian universe, which could be ours, two wandering souls, irreverent and thirsty, coincide with the Water Guardian.
He, scowling and bowlegged, will have to open his huge heart to regain the dance and his smile. They, amoral and impertinent, will have to learn to behave. All three need both water and learning to live.
In this story everything moves, waves, sways sinuously like a ship. The system, the emotions, the feelings… they are like water. A subtle work to learn to take care of yourself, take care of the environment and enjoy in harmony.
Shhhh! Emotions will flow like water between the pebbles. 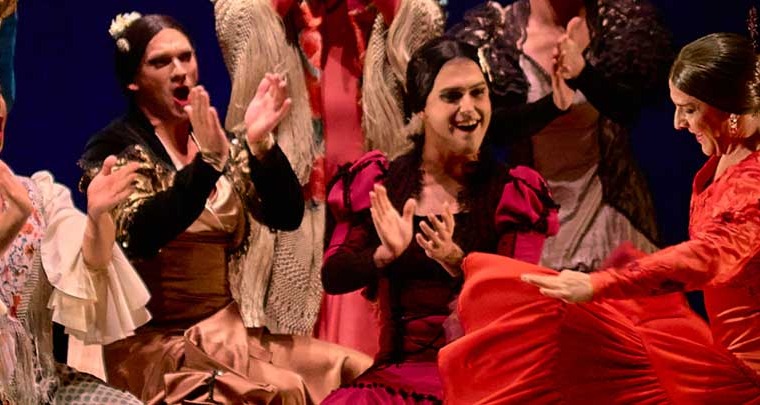 “When I was little I locked myself in my room and dressed in my mother’s green skirt. She adorned my hair with flowers, did my make up, and we danced together secretly. That dance was unthinkable outside those four walls ”.

From this intimate memory of childhood, Viva! is born, in circumstances where social and artistic rules impose, in some way, that the artist must manifest himself according to his gender. After the illusion, desire and need have been isolated, remaining silent for years, Viva! sees the light, recalling those moments. Leaving open the door that separates the private from the public.

A cry for the freedom of transformation, which doesn’t always imply a way of masking but rather a way of undressing.

Liñán proposes the plurality of dance, the different forms and the uniqueness of each one of them. Together with six flamenco dancers, they will explore and dive into dance and this fascinating universe of cross-dressing. Here what counts are the emotions.

As the critics have said, this show will remain in the public memory forever. 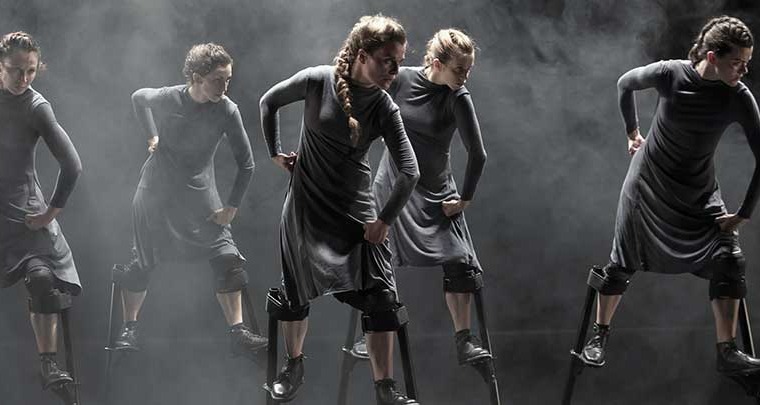 When dance goes straight to the emotions.

Mulïer is a dance performance performed by five women on stilts. With this montage they intend to investigate the physical limits with dance and balance, movement and poetry or strength and emotions.

Women are the starting point. The show arises from the need to explore female identity through bodily play, emphasizing image, visual poetics and narration to reach the viewer’s sensitivity.

Every woman harbours within her a wild and free being, an instinctive nature that different civilisations have endeavored to domesticate throughout history. Her natural cycles have been forced to adapt to artificial rhythms to please others, thus extinguishing her innate creative, instinctual and visionary gifts.

This show is a tribute to all women, who for centuries and centuries of oppression have fought and continue to fight to keep their wild selves alive, and who claim their right to dance and run freely through the streets and squares of our society.

Mulïer has won 4 Artes Escénicas Valencianas awards, 2 MAX awards, an UMORE AZOKA award, a Deventer Award for Contribution to Street Arts and the Moritz Award from the Fira Tàrrega, amongst others. 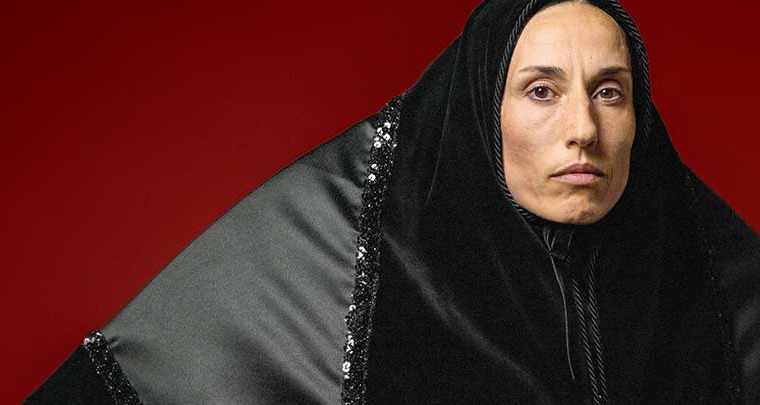 Sonoma is a word that doesn’t exist in the dictionary of the Spanish language. However, by combining the Greek word soma (“body”) with the latin sonum (“sound”): Body of sound and sound of the body.

Marcos Morau takes up the essential ideas of the piece he created in 2016 for the Ballet de Lorraine, “Le Surréalisme au service de la Révolution”, which is based on the figure of Buñuel, around medieval Calanda and cosmopolitan Paris, between the Jesuit discipline and surreal freedom. Buñuel has never been so current: he could see perfectly what the future held for us when he found, in the noise of the drums of Calanda and all of Bajo Aragón, that scream directed bluntly to the viscera.

And the women. Our big and small struggles.

We are the pollen that feeds the world.
The first bee.
The perfect storm.
We who see the world from a bird’s eye view.
That we are the eclipse and its shadow.
Those who deviate from the path.
Those who picked up the basket from the river.
Those who watch your nights and get up with the sun.
We who keep the relics.
We who have just arrived and we are fresh…

Sonoma begins with a scream and ends with a loud bang. In the middle, in a landscape between reality and fiction, a group of women try to free themselves from the ties of the known, to cross their borders using their intuition and instinct. When they come together, that inner cry that they share is amplified, it grows until it overflows and they celebrate it with rituals and offerings, with hypnotic songs and dances. They enter an unknown and dizzying state, a state that frees their minds but at the same time reminds them of their human condition. Sonoma is that place where the storm originates, where the drums continue to beat with a force that shakes the earth and opens a deep crack in the ground under our feet.